5G network architecture will have to deal with increasing traffic and changing applications. It should improve placement of intelligence in an open environment integrating fixed and mobile infrastructures. For this purpose, COMBO has defined an architectural framework based on Next-Generation Point of Presence (NG-POP). NG-POP will be an important location in the operator infrastructure, which hosts in particular the subscriber IP edge for all access types (fixed, Wi-Fi, mobile). NG-POPs can be distributed at main central offices, close to the user; or centralized at fewer locations at core central offices, at the boundary between aggregation and core networks.

The COMBO European project has organized in Lannion on 28th April 2016 a public demonstration of both distributed and centralized NG-POP flavours in a fully converged environment. This demonstration followed 7 weeks of integration and measurements on the COMBO demo platform. Five booths have described and demonstrated key transport and functional enablers of fixed mobile network integration. In particular, the demonstration featured unification of transport resources in fixed, mobile and Wi-Fi access and aggregation networks thanks to an integrated optical infrastructure supported by an 18-km field fibre ring. It also demonstrated the concept of Universal Access Gateway (UAG) as a set of virtualized network functions hosted in NG-POP and allowing unification of user authentication and data path management for all fixed, Wi-Fi and mobile users.

c virtualized network functions of UAG such as universal AUThentication (uAUT) and universal Data Path Management (uDPM), as well as uDPM-assisted distributed caching. As an example, one use case has shown seamless authentication of the user on several access types with the same credentials. Another one has shown the combined use of two access types by a given user session and its individual traffic flows. Another use case has demonstrated how distributed caching units assisted by uDPM functions will allow an improved performance for video streaming applications.

This COMBO demo event fully reached its technical and dissemination objectives, with fruitful experimental results and about 40 external visitors. The various booths shown at this demo event have also been video-recorded, so as to allow further dissemination of COMBO experimental outcomes and vision on integration of fixed and mobile networks for 5G architecture. Leveraging on this achievement, the COMBO project is pushing its ideas into the on-going work towards 5G standardization.

In particular, Telnet Redes Inteligentes demonstrated the development of a novel Wavelength Selective (WS) WDM-PON system featuring co-existence with legacy GPON technology, up to 32 10G symmetric 100GHz WDM optical channels, is able to transport CPRI traffic in a transparent way for fronthaul purposes, and is compatible with current FTTH deployments based on power splitters. This novel WS WDM-PON system is an important milestone for the development of future integrated fixed and mobile 5G transport technologies, as it implies important CAPEX savings for Telcos because it makes possible the reuse of their current optical access intrastructure for future 5G deployments. Other relevant aspects of the system are the integration of 10G T-SFP+ and tunable filters in the ONU, and the development of a novel control plane mechanism between the OLT and the ONUs to make possible to dynamically and automatically control the tunability of both the transmitter and the receiver channels on each ONU to any of the available WDM channels in the network with no collisions. In this way, any ONU can make use of any of the optical channels in a dynamic and automatic way e. g. in case of link failures on a particular channel, which will also rely on important OPEX savings for Telcos due to the automatic optical reconfigurability and flexibility of the network 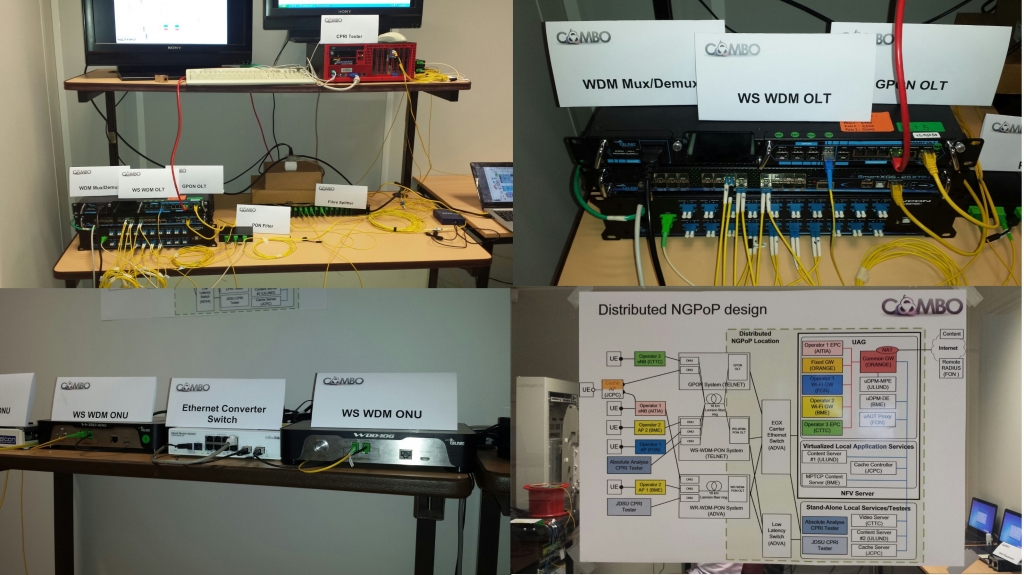 Equipment used during the demostration